Nine sacks of bat poo can make all the difference..!

Worcestershire is fortunate to have an active Bat Group that does good work to record and conserve bats across the county, so the Mammal Group can concentrate mainly on other furry species.  Occasionally, however, we do get involved in a bit of bat work, especially where our expertise in faecal matters can be applied to good effect!  This was the case last week, when Jane, Charlie and I donned our protective clothing and head torches to remove huge quantities of bat poo from inside a very important lesser horseshoe bat roost on the Malvern Hills. 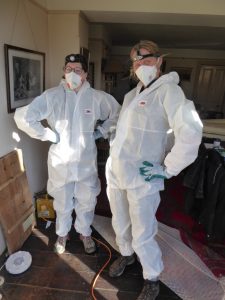 The bats roost in the warm spaces beneath the floorboards of a private residence, where hot water pipes create the perfect range of temperatures for successful breeding during the summer months.  However, fresh bat poo and urine settling on hot metal pipes is a recipe for trouble, causing a pungent niff to rise through the floorboards to irritate the residents in the dining room above.  Actually, the residents are wonderfully tolerant of the bats; but maintaining that tolerance requires a bit more than scented oils and air fresheners that fail to mask the smell; the most effective solution is to remove the problem at source every few years during the winter period while the bats are absent and hibernating elsewhere. 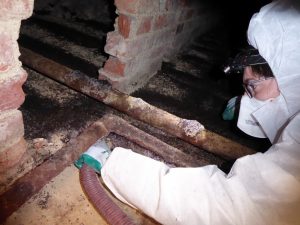 Working in shifts and lying prostrate in the tight spaces beneath the floorboards, we used a combination of an industrial vacuum cleaner and manual shovelling to clear the crusty accumulations of bat poo several centimetres deep.  While shovelling by hand, we filled large plastic buckets in a relay system, pushing them back to the next person with our feet as a new empty bucket was pushed forwards, all the while trying to keep our face masks in place so as to minimise the amount of dusty poo that we inhaled.  The whole experience reminded me of the Second World War film The Great Escape, which told the story of British Commonwealth prisoners digging an escape tunnel in the infamous Nazi Germany Stalag Luft III camp, where one of the challenges was the undetected disposal of all the soil that the tunnel diggers had excavated.  Fortunately, unlike the POWs and their soil, we didn’t have to scatter bat poo around the grounds from special pouches sewn into our trousers; all our poo was bagged up to be used as nitrate-rich fertilizer on our gardens.

Thankfully our claustrophobic work was completed in less than three hours, and none of us was shot from a watch tower when we finally emerged – blinking, sweaty and poo-dust-covered – into the daylight and blissful fresh air.  We celebrated our haul of nine full refuse sacks of bat poo with several glasses of cold water (despite the face masks, our throats were dust-clogged for several hours).  So now the residents can look forward to a few summers of reduced niff in their dining room; and we can anticipate some pleasant June evenings counting the bats as they emerge from their roost to feed on insects in the woodland and scrub on the Malvern Hills.  And if the colony stays big and strong – as we hope it will – before long we will have to repeat the whole poo clearance exercise all over again! 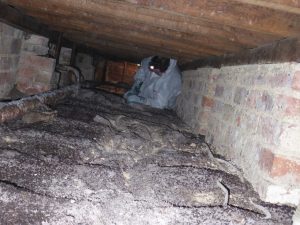 Nine sacks of bat poo can make all the difference..!

Posted On February 20, 2019 ~ 0 Comments
Worcestershire is fortunate to have an active Bat Group that does good work to record and conserve bats across the county, so the Mammal Group…