On a recent trip to Scotland I spent a day in the lovely Perthshire town of Dunkeld beside the mighty River Tay, which has an exciting mammal story to tell. Having followed news of the successful establishment of a now widespread beaver population in the Tay catchment, I was keen to find signs of beaver presence along the riverside. These Tay beavers – reportedly arising from covert and possibly illegal releases dating back to about 2004 – are nick-named the ‘unofficial beavers’, to separate them from the official, Government-approved trial reintroduction of beavers much further west at Knapdale in Argyll. The story of how these unofficial beavers have returned to enrich and rewild the landscape is beautifully told by Scottish nature writer Jim Crumley in his book Nature’s Architect (published by Saraband in 2015). 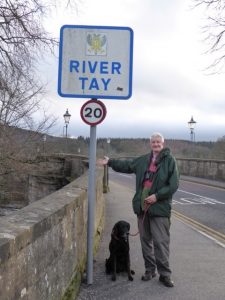 In contrast to the Knapdale project, which was tightly constrained by licensing requirements, habitat factors and possibly genetic ones too, the Tay beavers have thrived and expanded from an estimated 150 animals in 2012 to 430 in 2018; they have now hopped over a watershed to start colonising the Forth catchment to the south. Whilst many welcome the beavers’ return to Scotland as a positive step for nature conservation, some farming and fishing groups are concerned about impacts upon their interests. Scottish Natural Heritage (SNH) has had the tricky job of reconciling these conflicting interests and advising the Scottish Government on the best way forward.

Because the Tay beavers are currently unprotected, there have been some instances of beavers being shot and their dams and lodges destroyed. However, on 23rd February 2019 Roseanna Cunningham (Scottish Environment Secretary) announced that – from May 2019 – all beavers in Scotland will be legally protected, with new guidance soon to be issued by SNH to farmers on how to live alongside their new neighbours. Fortunately, we can learn a lot from our friends in Europe, where wild beavers have been restored to most countries and a suite of humane mitigation techniques has been developed to avoid or reduce their impact upon human interests. The forthcoming legal protection is wonderful news, and should help to secure a sustainable future for beavers as a native mammal in Scotland. 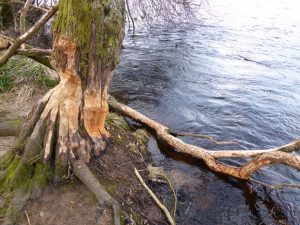 Further south – and closer to Worcestershire – there are more examples of beaver populations, both official and unofficial. Those ‘discovered’ on the River Otter in East Devon a few years ago have been allowed to remain as part of a 5-year Devon Wildlife Trust project licensed by Natural England; in 2018 a pair was released by Michael Gove into an enclosure in the Forest of Dean to help with flood protection for the town of Lydbrook further downstream (though recently there has been a hiccup due to disease issues); there are also reports of ‘unofficial’ beavers elsewhere in the River Wye catchment, including in our neighbouring county of Herefordshire; and there are further pockets of possible beaver presence in Wales and southern England. I am not aware of any in Worcestershire, but we would be wise to familiarise ourselves with the very distinctive signs that they leave.

And did I find any signs of beavers during my day beside the River Tay in February? The photos provide the happy answer. It was a huge thrill for me to make contact – albeit indirectly – with a long-lost native mammal that has returned to the wild in Britain after an absence of 400 years. 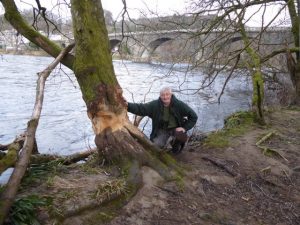 Posted On February 26, 2019 ~ 0 Comments
I recently spent a windy day walking up a glen inside the Cairngorms National Park in North-East Scotland.  My walk took me from the middle…

Posted On March 13, 2019 ~ 0 Comments
On a recent trip to Scotland I spent a day in the lovely Perthshire town of Dunkeld beside the mighty River Tay, which has an…