A keen gang of us Mammal Group members gathered on a Saturday morning in early October for a leisurely stroll around Hallow, north-west of Worcester, starting off at the Village Hall and wending our way through woodland, field margins, aquatic and suburban habitats.

After having already clocked several well-used mammal paths criss-crossing through the woodland, we stumbled upon a scattering of cherry stones on the woodland floor; each of which, upon closer inspection, had a tiny hole nibbled by a small mammal, probably mice. We later found a stash (or “cache”) of these cherry stones beneath a tree trunk. 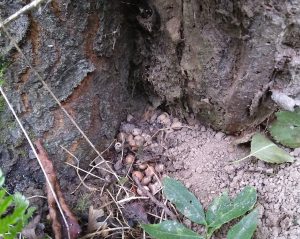 We then found our first poo of the walk, which obviously got us excited! Conveniently, the depositer was very thoughtful and left the scat in the middle of the board walk for all to see; we concluded it was probably badger judging by the amount of fruit stones. The contents of scats in mammals can be so variable across the year and it just so happened there was a lot of cherry in this wood.

Before leaving the woodland we stopped to think about some of the other mammal species which might use this habitat: Jane pointed out some natural bat roost features in some of the damaged or diseased trees, such as crevices where the bark has lifted which are just large enough for a bat to squeeze in and make a home. We also saw some evidence of muntjac browsing, where the tips of tree saplings have been nibbled. And finally mole hills: a good mammal record which are easily ignored and an example that they don’t just appear in our manicured lawns! To round off the woodland element of our walk we passed a whopping veteran pedunculate oak tree, which likely plays host to a plethora of other species as well as mammals.

Out of the woodland, we trundled along the edge of a field and got down on our hands and knees to rummage through the grassy tussocks in search of vole runs, of which we found several. We also deemed this habitat, which had quite long grass along its margins with the wood, suitable for hares and rabbits, and reminded ourselves that it’s not too late to pop out and do a lagomorph transect!

Along the field margin was a large pile of rubble, and we were delighted to find another scat, proudly depoisted atop a boulder – this time we suspected fox, even finding a couple of jaw bones in there which belong (well, belonged) to small mammals. We will be looking at the identification of small mammals by their jaw bones at the owl pellet workshop this Sunday, so hopefully someone can also determine what was in that fox poo! 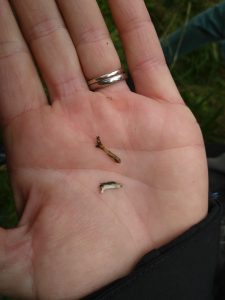 Our route cleverly took in a small watercourse, where we were lucky enough to find an otter spraint, also strategically deposited on a large fallen log high enough out of the water to serve as a handy territory marker. It was certainly fresh enough for us all to have a good sniff and debate its “not unpleasant” perfume (jasmine tea, anyone?).

On our way back to the village hall, down a footpath squeezed between residential gardens, we noted several small gaps beneath garden fences which would be large enough for hedgehogs to pass through and remarked how important these commuting routes are for our garden wildlife’s connectivity. 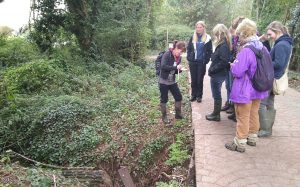 Thanks to Poppy for organising a lovely walk and to the members who came and hopefully learned a few mammally facts along the way. This style of leisurely but targeted recording is a really valuable way of gathering records and contributes to the wider picture in nature conservation. We even managed to escape the rain!

We hope to see you soon at another mammal event and we’re especially looking forward to our excellent line up of winter talks!

Posted On November 27, 2016
The results of the Worcestershire Mammal Group's first summer survey are in! A huge thank you to everyone who took part this year in our…

Posted On October 24, 2019 ~ 0 Comments
A keen gang of us Mammal Group members gathered on a Saturday morning in early October for a leisurely stroll around Hallow, north-west of Worcester,…